The Euro-Eco Challenge activities have been launched in the Greek city of Trikala and citizens are using the TEAM applications to make their everyday trips in the city. The demonstration, that began on mid-February, performs a set of challenges for the participants in Trikala to be completed. 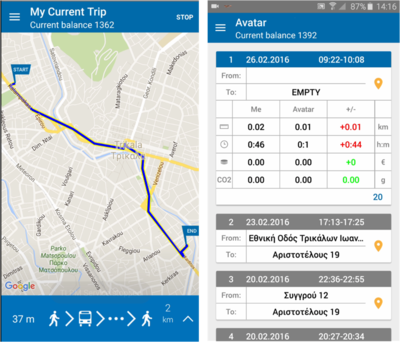 Screenshots: coaching with support from virtual/avatar users
The first challenge for the participants is to use the TEAM CCA app for a period of three weeks to perform their every day trips in an eco-friendly way. Therefore, this coaching application provides reliable and exact information about true travel costs, travel times, trip alternatives and CO₂ emissions for every participant’s trip in the city.

The application uses an avatar (or you could say a virtual traveller) which performs the same trips as the app user, with the exception that it always selects the most efficient of all transport modes. In this way, the app users have a virtual coach to support them with their travel plans in real-time. In the end of each trip, the app further provides an easy overview to compare the actual trip with the virtual travel plan. 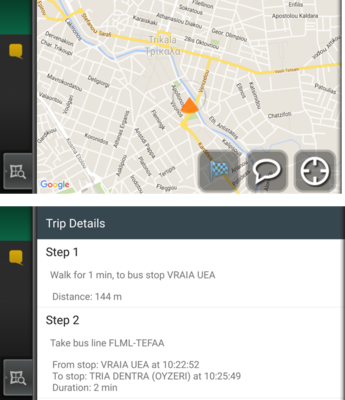 Users planning their bus trip using the TEAM app in Trikala
The second challenge for the participants is to perform their everyday bus trips in a collaborative and efficient way through the use of the TEAM CPTO app. Passengers and cities need an efficient public transport network, with reduced emissions at minimal operating costs. The TEAM app for public transport optimisation solves this challenge by providing a computation of optimal bus routes and timetables. It increases the flexibility of the Trikala public transport buses by adapting it to the demands and needs of both the city and citizens.

Furthermore, the app analyses input from travellers that is transmitted via their smartphone (including positions, destination, departure time, selected bus route, etc.) and the real-time public transport timetables.

On the basis of this input, the system can optimise bus schedules in long and short term. For example, it can adapt routes based on traffic and accidents and add or skip bus stops. Furthermore, it provides information before and after the trip to the traveller. The result is a more flexible and better organised network in the city. 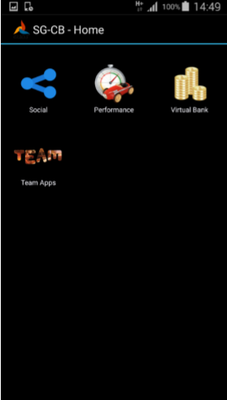 The gaming application in TEAM
This challenge is part of the gaming aspect, which is one of the central features of TEAM. TEAM applications will support the users to perform better in the challenges set in Trikala city, which have a common goal: to serve the community (such as lowering the overall carbon emission and enrol a collaborative style of travelling). The challenge for each TEAM app user is to be among the best players.

Feedback is provided in real-time about the current average and best performance, together with the individual performance via a specific gaming application, the SG-CB app. This is a TEAM meta-application which exploits data communicated by the other applications in order to support good user behaviour.

The application is available to the users as a smartphone app and helps promoting good travelling behaviour in the city of Trikala. It provides a contest environment where the users compete on the challenges mentioned before. For example, they may “win” points that can be redeemed for tickets and discounts.

How will collaborative travelling work in Trikala and who is going to be the eco-traveller of the month? Real-world rewards such as free access to Trikala pool premises and cinema club are foreseen for the winners of the Euro-Eco Challenge in the city of Trikala.