Several of the biggest automotive industries are located in Europe. The Spanish, French, Italian or Polish economies rely on their strong car industry – and of course the German. During times of increasing digitalization, the European automotive industry is willing to keep and expand its leadership. In this context, the European project TEAM aims to support European stakeholders of the car industry to successfully manage digitalization.

Twenty-eight partners across Europe – from carmakers, ICT companies or infrastructure suppliers to research institutes – develop applications for collaborative mobility. Collaboration is one of the key concepts to overcome key challenges of mobility in smart cities. As one of eight German partners, Berlin-based Fraunhofer FOKUS coordinates the project.

Recently, the German government published an ambitious strategy paper. Germany’s aim: to become the leading market in automated and connected driving worldwide. The German government derives its claim from the history of the German automotive industry, which is responsible for major innovations in the automotive domain. According to a study by PWC, the German companies Volkswagen and Daimler are ranked first and second in connected car innovation in the period 2009-2015, followed by Ford and BMW. The consultants foresee annual sales of connected car technologies tripling to €122.6 billion by 2021. But not only classical carmakers compete for the biggest market share. Tech-companies such as Apple or Google heavily invest in automated and connected driving technologies. Google is already testing its own driverless cars and rumors prevail that Apple is on its way to follow. The global competition is enormous. The German automotive sector faces big challenges. As partners of TEAM, BMW and Daimler’s Daimler Center for Automotive Information Technology Innovations (DCAITI) located at the Technical University Berlin aim to develop key technologies of future mobility.

The German government is self-confident that the German automotive industry is prepared to maintain and further expand its leadership in digital automotive innovation. Its aim is to allocate the research, testing and production of key technologies in Germany. To further push the technology, the government established a test environment for connected and automated vehicles on one of the country’s biggest highways, the A9 in Bavaria. It enables producers and scientists to test their new technologies outside of the labs in a real-life environment.

In regular roundtable-meetings at the invitation of the Federal Ministry of Transport and Digital Infrastructure, partners from science including the TEAM partner Fraunhofer IAO, the economy and politics come together to discuss current developments and exchange best-practice experiences. These partners also agreed on a dynamic innovation process that is divided in successive development stages that aim to constantly introduce new elements of connected and automated driving into daily use. Currently, assistance systems and partly automated driving are already in operation on streets. The ultimate aim is to establish the right framework for fully automated driving. As the technology advances, the actual driving becomes less important for the driver. The time on the road can be used more efficiently and productively, as cars evolve into fully digitalized mobility-, information-, and communication platforms. Personnel data to offer tailor-made services and the compatibility of different services become more and more important. If car producers do not want to decay to the supplier of the necessary hardware for companies such as Google or Apple, they themselves have to exploit the opportunities of connected and automated cars and provide services and applications.

The acquisition of the mapping company Here by Audi, Daimler and BMW was understood as a clear declaration of intent: the German car industry realizes that the digitalization requires adaption and foresighted management to compete against big IT companies such as Google and Apple. To succeed, the automotive sector is willing to pursue joint investments and work together in research and development – such as in the TEAM-project. 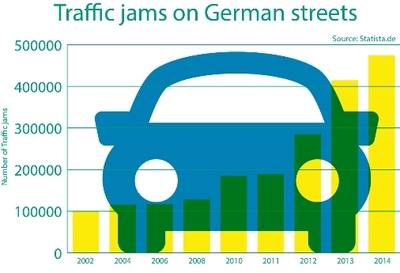 In 2002, 100.785 traffic jams reports were registered on German streets. By 2011, the amount nearly doubled (189.000). In the following three years, the number literally exploded: in 2014, 475.000 traffic jam reports were registered. To solve the problem of limited capacities, a more efficient traffic and transportation system is crucial. The German government sees the potential to increase traffic efficiency with automated and connected driving technologies.

Collaborative driving is based on two communication channels: car-to-car communication and car-to-infrastructure communication. Thanks to these communication channels, vehicles and infrastructure equipped with the relevant technologies are able to exchange data and thus react to traffic developments in an aligned way in real-time. Hence, increasing traffic flows can be registered and real-time solutions, such as changes in traffic light settings or traffic directions applied. Such an improved traffic management does not only contribute to prevent traffic jams, it also reduces stop-and-go situations and mobility related-emissions. Besides, technologies such as driving assistance systems diminish accidents related to human mistakes and thus ameliorate traffic safety.

As German customers are highly sensitive on data privacy, the success of connected and automated driving technologies will also depend on a legal framework that guarantees the protection of personnel data. In cooperation with its partners, the German government is working to establish the necessary legal and technical framework as soon as possible. Overall, the government’s strategy report phrases a clear and ambitious vision: leadership in research, development and production for automated and connected driving technologies.

To achieve this goal, eight German stakeholders – namely BMW, DCAITI, EICT, Fraunhofer FOKUS, Fraunhofer IAO, Here, Swarco STS and Technical University Berlin – contribute to the European TEAM-project. It is obvious that ambitious goals require European collaboration. The research results are presented as demos in seven test sites across Europe: Torino and Trento in Italy, Gothenburg in Sweden, Athens and Trikala in Greece, Tampere in Finland and the biggest one being in Berlin at the end of the project.

Stay tuned for more information about these events in 2016. TEAM wishes you Merry Christmas and a Happy New Year!